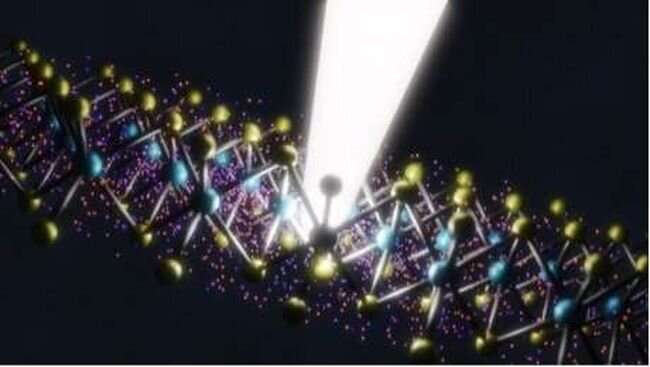 Quantum materials are materials with unique electronic, magnetic, or optical properties that are supported by the behavior of electrons at the quantum mechanical level. Studies have shown that interactions between these materials and powerful laser fields can give rise to strange electronic states.

In recent years, many physicists have attempted to tease out and better understand these exotic states, using different physical platforms. A class of materials that has been found to be particularly promising for studying some of these cases are monolayer transition metal chalcogenides.

Monolayer transition metal chalcogenides are two-dimensional materials composed in single layers of atoms of a transition metal (for example, tungsten or molybdenum) and a chalcogen (for example, sulfur or selenium), which are arranged in a crystal lattice. These materials have been found to provide exciting opportunities for flocite engineering (a technique for manipulating material properties using lasers) of excitons (quasiparticle electron hole-associated states).

Researchers at SLAC National Accelerator Laboratory, Stanford University, and the University of Rochester recently demonstrated flocite geometry of excitons driven by strong fields in a single-layer transition metal chalcogenide dimer. Their findings, presented in a paper in nature physicscan open up new possibilities for the study of exciting phenomena.

“Our group has been studying strong-field processes such as high harmonic generation (HHG) in 2D crystals subjected to intense mid-infrared laser fields,” said Shambhu Ghimire, one of the researchers who conducted the study. Deer.

“We are very interested in understanding the detailed mechanism of the HHG process, and 2D crystals seem to be a great platform for this, because it is something that lies between isolated atoms in the gas phase and bulk crystals. In the gas phase, the process is understood by looking at the dynamics of an ionized electron in a laser field and its recombination With the parent ion.”

When exposed to strong laser fields, 2D crystals can host strongly driven excitons. In their previous research, Ghimire and colleagues explored whether propelling these quasiparticles with powerful laser fields and measuring high harmonics would allow them to better understand the solid-state HHG process.

“While this previous work inspired our study, we also began to measure the change in absorption on these driven systems and learned more about the disequilibrium state of matter itself,” explained Ghimire. “In fact, we found that no previously observed absorption features could be linked to what are known in the literature as flocite states of materials subjected to strong periodic drives.”

More specifically, the photon energy of the laser pulses in the mid-infrared is about 0.31 eV, which is much lower than the optical band gap of the TMDs monolayers (about 2 eV). Therefore, the team did not expect to observe a particularly large generation of charge carriers.

“At the same time, the photon energy in our structure is tunable and can be resonant to the exciton energies of the monolayer,” Ghimire said. “To manufacture our material samples, we collaborated with Professor Fang Liu’s team at Stanford Chemistry. This group pioneered a new method for fabricating millimeter-scale monolayer samples, which was also key to the success of these experiments.”

“We found that the originally dark state of the exciton can be optically brightened by mixing with a single photon, which manifests as a discrete absorption signal below the optical bandgap,” said Kubayah. The second mechanism we uncovered is the dynamic Franz-Keldysh effect. This is caused by an external laser field that drives momentum into the excitons, resulting in a global blue-shift of the spectral features. This effect was observed because we applied a high-field laser pulse (~0.3 eV). /nm) is strong enough to decompose an electron-hole pair.”

By combining the two mechanisms they unveiled, Kobayashi and colleagues were able to achieve energy tuning of more than 100 MeV in a sample of monolayer TMDs. These remarkable results highlight the enormous potential of single-layer transition metal chalcogenides as a platform for realizing strong-field exciting phenomena.

“One of the unanswered questions in our work is the real-time response to a strong-field excitonic phenomenon: How quickly can we turn hypothetical quantum states on and off?” Ghimire added. “We expect that by bypassing the turbulent field, it will be possible to imprint the oscillation modes of carrier laser waves in hypothetical quantum states, while approaching the sub-petahertz regime to control optical properties.”