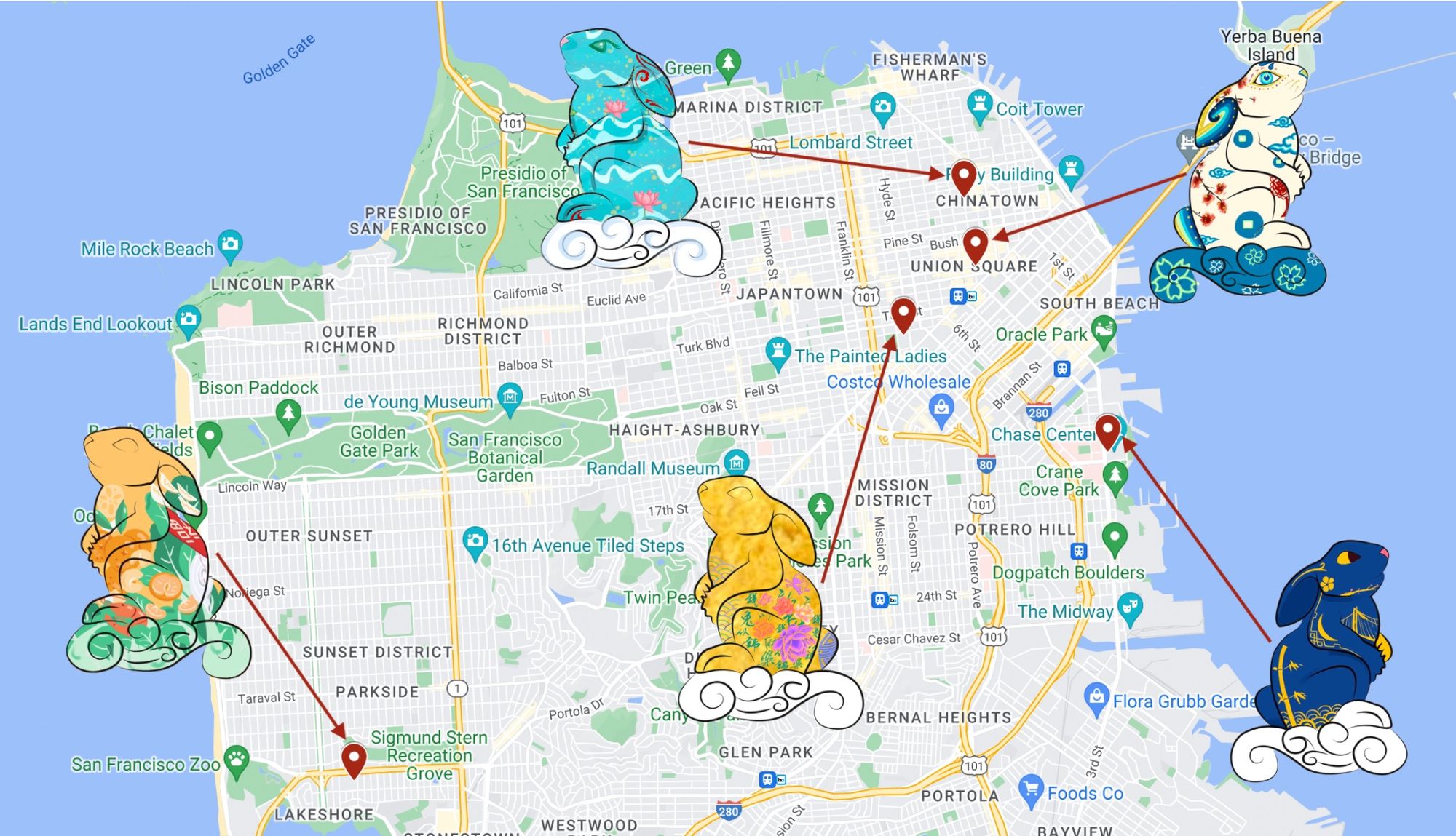 Check out all the rabbit statues that were just installed around San Francisco to celebrate Chinese Lunar New Year’s zodiac year of the rabbit—and these intricately designed rabbit monuments now grace parks, markets, and museums.

The 2021 Chinese New Year parade that was canceled by COVID-19 has deserted San Francisco to a surprising invention that is now an enduring tradition — Lunar New Year zodiac statues that are placed all over the city. Following the 2021 Bulls and 2022 Tigers, the San Francisco Chinese Chamber of Commerce has once again commissioned several artists for a multi-installation Lunar New Year public art show, spanning San Francisco, this year to celebrate the Year of the Rabbit.

The project is called Rabbit on Parade, and the map above shows where each of these rabbits were found, as well as more information about the artists and symbolic background of each rabbit. This is part of the preparation for the Chinese New Year (4 February) Festival and Parade, which you can follow on Facebook, Instagram, and Instagram Twitter for updates.

“Although the Zodiac Animals on Parade project began as a response to the lockdown in 2020, it has quickly become a new SF tradition that many are looking forward to,” Stephanie Mofson, owner of Parade Guys and Creative Director of Rabbit on Parade, told SFist. (Below is Mufson’s bunny.) “The program is a great opportunity for local artists to share their work publicly, and it also provides an opportunity for San Francisco locals and visitors to explore the city and discover unique artwork.”

So went SFist hunting wabbits…and we have pictures and the location of each bunny figurine below.

The new Chinatown Central subway station is indeed perhaps the most Instagrammable Muni light rail station in the city. Now he has another photo-worthy cuteness in this big bunny with aqua blue eyes, jade eyes and pink lotus flowers.

You don’t need to pay mony fare to see this rabbit. It is located in the lobby area of ​​Chinatown-Rose Pak Station, which is a publicly accessible area that is not located behind the fare gate.

Prosperity in the year of the Rabbit by Stephanie Tao

Leaping to your attention in front of the Museum of Asian Art, this golden rabbit is rich in symbols such as Chinese coins, butterflies, flowers, and Mandarin characters described as “Chinese wishes of happiness.”

And this bunny has a front row seat to confront the daily corruption at San Francisco City Hall!

Peace be upon the house rabbit by Robin (Davey) Chow

The cherry blossoms arrive a little earlier this year, thanks to a Union Square bunny also released with blue clouds, Chinese coins, and plum blossoms.

“The ‘Peace Home’ bunny was painted with lots of love,” artist Robin (Davy) Chow said in a statement to SFist. “It’s meant to bring peace and happiness to every family.”

The Golden State Warriors color scheme, and some love for the Bay Bridge, make this bunny a great fit as this year’s Lunar New Year statue at the Chase Center in the Mission Bay neighborhood.

You’ll also notice some text on the back. According to an artist’s online statement, “Fei Chun reads on the rabbit’s back, from left to right, 動如脫兔 – Move Like a Swift Rabbit (Wish someone good health) and 恭贺新春 – Way of saying Happy New Year.”

Again, you don’t have to pay the Chase Center entrance fee to see this rabbit. The statue is outside Chase Center, in that little outer village they call Thrive City, and no entry is required.

Lucky Supermarket on Sloat Boulevard in Lakeshore has always done a great grocery store show around the Chinese zodiac for the Lunar New Year, and they did it again this year. This bunny is the theme of food and feast, with fortune cookies and mooncakes on display.

And Lucky put a whole bunch of oranges around the orange slices drawn on this bunny!

As was the case last year, the rabbits will be auctioned off when their public viewing period ends on February 5, and the proceeds will benefit the non-profit community. This year, these nonprofits include the Gum Moon Women’s Residence, the Manilatown Heritage Foundation, and RAMS, Inc. and Mental Health Association for Chinese Communities.

Related: Life-size bull statues arrive all over the city to celebrate the Lunar New Year [SFist]