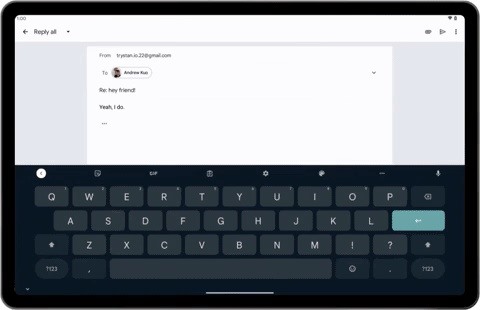 Android 12L and Android 13 have a tablet-only taskbar that lets you quickly open recent, suggested, or pinned apps and drag and drop apps in split-screen mode. While the taskbar is only for tablets and foldable devices, you can unlock this new feature for your Android smartphone with a little tinkering.

On tablets, the taskbar appears when you use other apps. You can long press on it to hide it when needed and then tap on the navigation bar to show it again. It shows six recently used, suggested, or installed apps, and when you’re not on the home screen, it also provides a link to your App Library for quick access to any app.

It’s an ever-present feature, but it can be changed to a temporary taskbar in newer Android versions, where it’s temporarily visible before hiding itself. You can make a small swipe up from the bottom of the screen to reveal it.

The current process is similar for Android 13 phones after the feature is unlocked, and the new interim version may be available if you’re on a beta version of Android.

If Developer Options is already unlocked, skip to step 2. Otherwise, open the Settings app, tap About Phone, find Build Number, and tap on it until you get a toast confirming that the Developer Options menu is unlocked. You may need to enter your device PIN to continue.

You can find your unlocked Developer Options on Google Pixel via Settings -> System.

Step 2: Set the option to the smallest width

In the Developer Options menu, look for or find the “Smallest Width” setting, nested under the Graphic section. Click Smallest Width, then record the device-independent pixel number (dp) there currently so you can quickly return to the original width later.

This is important because it is not easy to find the original dp later, and disabling developer options and restarting your device will not return your device dp.

When recording to a safe place, change it to 600 dp, and press OK.

Since a change to the smallest width setting shrinks the elements on your screen, we’ll adjust the font and width sizes to compensate. Head to Settings -> Display -> Display and text size. Next, drag the “Font Size” and “Display Size” sliders to the far right.

Step 4: Engage with the taskbar

Now, you will see the taskbar active at the bottom of the screen when the apps are active. The first time, you will be greeted with a quick start guide to this feature.

Click apps on the taskbar to quickly switch to them. Tap and drag apps from the taskbar or app picker to set them to half of the screen in split screen mode.

There are some kinks to living this far on the bleeding edge, including a somewhat awkward and limited home screen layout, a different keyboard layout that repositions the backspace key to the top row, and other quirks.

You’ll also notice that some apps will switch to a tablet UI. Messages, Google Photos, and Spotify are among the apps that will open in the tablet layout. The Calendar app uses a tablet look in landscape mode. The taskbar, split screen mode, app layouts, and tablet really stand out when your device is in landscape orientation.

Don’t miss: Android lets you set different languages ​​for each app for a truly multilingual experience — here’s how it works

Keep your connection secure without a monthly bill. Get a lifetime subscription to VPN Unlimited for all your devices with a one-time purchase from the new Gadget Hacks store, watch Hulu or Netflix without regional restrictions, increase your security when browsing on public networks, and more.

Other worthwhile deals to check out: