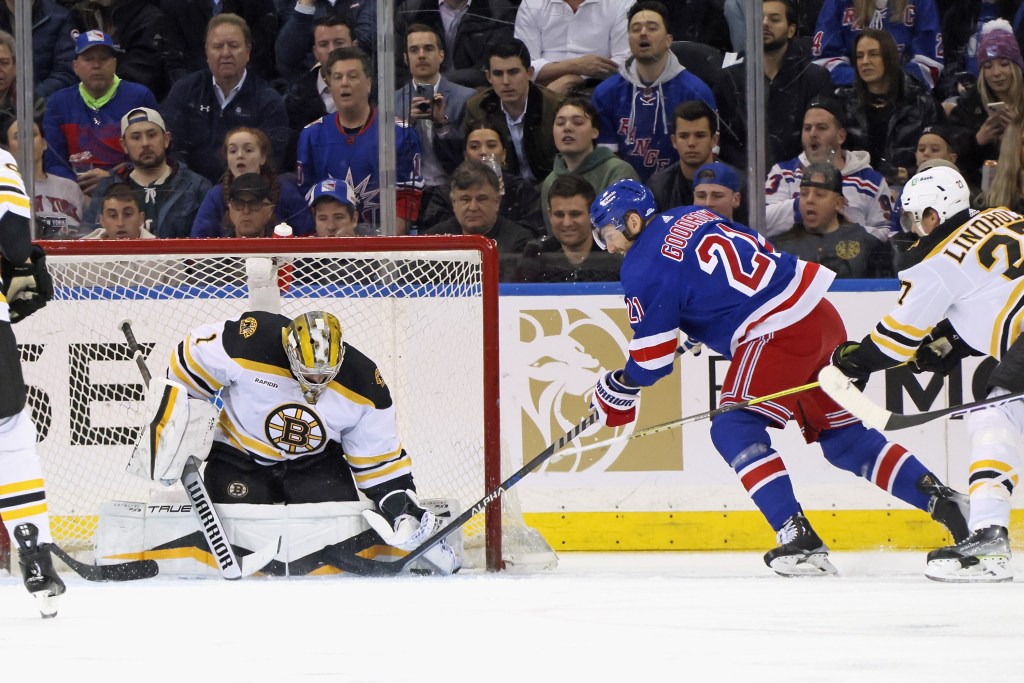 If the Rangers close their eyes, tap their heels three times and say, “We can beat Boston,” well, there’s a chance, yes, indeed, the Blue Jerseys might outpace the mighty B, who extended their start to 36-5-4 on Thursday with a 3-0 win. -1 on The Garden.

But wishing wouldn’t make it and wouldn’t believe it, either — even if the Rangers stuck with the idea that, other than a few mistakes, they could have dethroned the Bruins right then and there.

But it’s a leap of faith to think that this team, in its current lineup, can take the Bruins to a best-of-seven series in April or May. This, after all, is what they are all here for. It’s not just about making qualifiers. This is the minimum requirement this season.

The goal is to win six more playoff games than last year. It’s winning the Stanley Cup. Or as Barclay Goudreau said after Rangers’ fourth defeat in their last 20 games (14-4-2): “We’ve seen what’s best. It’s up to us to build our game. It’s up to us to get to their level.”

“We have big aspirations and big goals.”

To achieve them, there must be a significant improvement.

It’s becoming more and more difficult to understand how, in a game like this, Philip Shittle could have more than five minutes less ice time than Vincent Troschek: from 15:34 to 20:54.

It’s becoming more and more difficult to understand why coach Gerard Gallant didn’t move Chytil to a second-line position with Artemi Panarin and a right winger who would be named later (cough, cough, Goodrow).

Gallant blasted the second line with lethal post-game comments that focused on defensive lapses. He wasn’t talking about the right wing either on the night when Vitaly Kravtsov was substituted for Jimmy Vesey midway through the second half.

“I’ve talked about the second line all year, about playing better, a stronger defense, and not giving up on the one-man rush,” Gallant said. “And it continues to happen.”

But it’s more than that. Or, more clearly, less. When asked if Panarin and Troschek had developed proper chemistry, the coach replied: “They better get better.”

Trocheck is a good player. But he and Panarin showed no affinity for each other in 32 matches as linemates. However, with a clear replacement in Chytil, Gallant continues to try to hit those square pegs into a round hole.

This is, as the coach pointed out, the second line. It’s supposed to be the scoring line. In fact, the Rangers attempted to build three score lines, which is a fundamental flaw in their construction. They need a check line. They need a match line. But this is not how the team was built.

Ideally, you’d like Goodrow to anchor the matching streak. You would build around it. But that’s not an option unless General Manager Chris Drury rips the team apart and does a massive rebuild leading up to the March 3 trade deadline.

Here is a bigger problem. If Trocheck Bans Chytil Now, What About The Future? We’ve touched on this before, but if the 23-year-old’s ceiling for the Czech Republic is third-line, his long-term future will lie elsewhere. Remember, Trocheck has a full no-move clause during 2024-25. And Chytil is a pending restricted free agent whose cap is expected to rise from $2.3 million to $4 million.

After caring for Chytil for five years, losing him, whether on this deadline or over the summer, would be more than a shame. It would be a crime.

The Chris Kreider – Mika Zibanejad – Cabo Kaku unit seemed disjointed the entire time. Trocheck’s line created chances, perhaps a top-notch hat-trick for Panarin, who looked tentative and could not finish the match. Alexis Lafreniere met Chytil on the third line that included Goodrow, and he had one of his most engaged nights of the year. The line required more time.

The bar is set. Rangers must be better. The guards should be different. Same age will never be good enough.