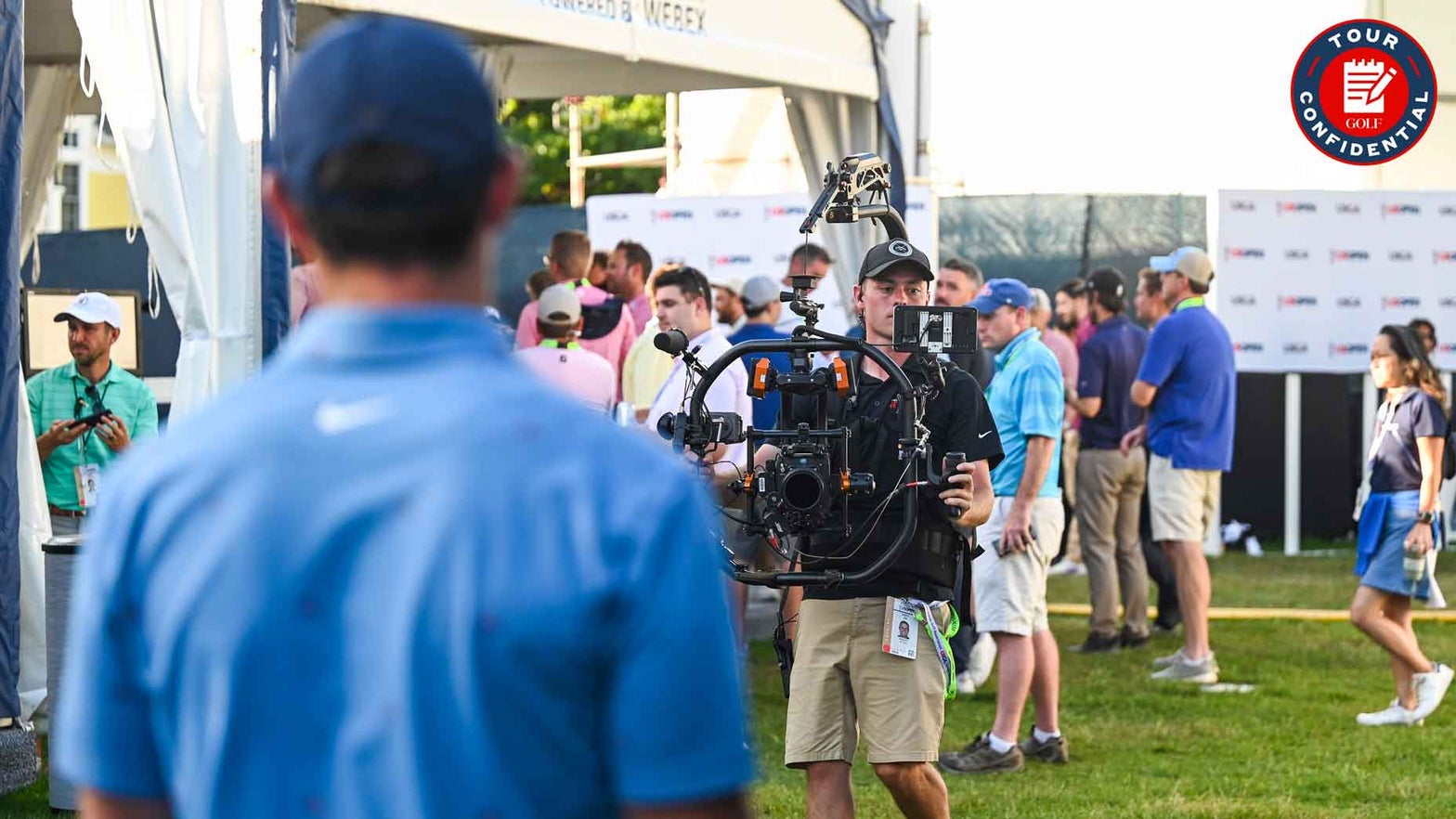 Rory McIlroy was photographed by a Netflix photographer during last year’s US Open.

Check out each week the unfiltered opinions of our writers and editors as they break down the hottest topics in sports, and join the conversation by tweeting to us @employee. We discuss this weeks Trailer for the new Netflix PGA Tour documentary series, Tour Payouts and the start of the LPGA season.

1. Netflix has released its teaser trailer for the much-anticipated PGA Tour documentary series, based on the popular F1 campaign to survive. It also appears that it will feature Rory McIlroy, who was unknown until the trailer came out. dubbed full swingIt premieres on February 15th. What are you most looking forward to seeing in this documentary series, and do you think it will appeal to a non-golfer or viewer who doesn’t already watch professional golf?

Ryan Barath, Senior Equipment Editor (@employee) As a hardcore golf fan, I’m excited to get a more inside look at professional golfers, their opinions on the state of the tour as a whole, and in general, a behind-the-curtain look at the great players.

The problem this show will create for new audiences is an old problem: How is golf presented on TV. Between the TV windows and the way some golfers play, no matter how many people would love to see Joel Dahmen at waste management, trying to see him on a regular broadcast is next to impossible. This is where F1 still has a huge advantage, because every race is every driver, even though with the new particular events, I think that’s what the Tour is trying to achieve.

Zephyr Milton, Associate Editor (@employee): I’m so excited to see my co-workers etch! A handful of GOLF employees have been to various events this past year, and I’m excited to see how they fare on the show. In terms of attracting non-golfers, I’m sure competing on the LIV-PGA Tour should be an interesting story. Drama sells, and there was nothing more dramatic in professional golf last season than the Saudi saga.

Jack Hirsch, assistant editor (@employee): I’ve polled some of my friends who either play golf or don’t golf, and most of them are at least intrigued. I didn’t get to watch the F1 series, but when that came out I felt like I knew a lot of people who were suddenly F1 fans. I’d be surprised if it had the same effect, but I think we can expect a good number of people to learn about the game through it. I’m very much looking forward to seeing players interact with LIV in real time. So cool they got a poulter!

Dylan Diether, Senior Writer (@employee): Will it have an effect on non-golf fans? Of course – it’s Netflix. It’s hard to think of a better way to reach new audiences than by tapping into the massive list of content-hungry subscribers. What am I most looking forward to? Look behind the scenes as many stars make life-changing decisions about leaving for LIV.

2. Harry Higgs said Golf Week He thinks the PGA Tour may have a problem with its TV product now that several bigwigs have jumped to LIV. “We joke back and forth, [LIV] He took all the a**holes,” Higgs said. “They took all the bad guys. And that’s a problem.” What do you think of his evaluation?

Parath: Sports are popular because they are entertaining, and as easy as it may become to get casual fans involved in contests and “good” versus “bad”, I think most golf fans get to watch high-level golfers try to win events. So overall I don’t really agree with Harry on this.

Milton: I think Higgs hits a great point. Every sport needs its heels, and the Tour has lost most of it. The lack of real “bad guys” takes a little juice away from the tour product.

Hersh: Every sport has its villains. The NFL has the Patriots and the Cowboys. MLB has a Yankees team. The NBA has the Lakers. People like to have something to hate. This was always a little trickier in golf, but there were definitely guys who played the part at least. I think losing a few players hurts a little bit, but looking at the way golf is, I think it’s more of a positive. I stand with RB’s more optimistic view.

Dither: The Player Impact program basically ranks players by their value in the round – and LIV got five of the top 10 players from the 2021 PIP. (Phil Mickelson, Bryson DeChambeau, Brooks Kupka, Dustin Johnson and Bubba Watson.) That’s not good! The tour is based on the storylines of its characters and now many of those characters are gone. More will replace them, of course. But this will take time.

3. The PGA Tour has long doled out 18 percent of its tournament bags to the winner of its typical 36-hole events, with the runner-up typically getting around 10 to 11 percent. Adam Scott was asked about this at the Sony Open and suggested giving 40 percent to the winner. (“Award of Excellence,” Jordan Spieth said he was not opposed to increasing the winner’s share “two points” but disagreed with 40 percent. For comparison, LIV Golf paid 20 percent to the seven singles tournament winners. Is the PGA Tour due to adjust that number? Why not?

Parath: Historically, the Tour was created to provide professionals with the ability to “make a living,” but with so much money in the sport at the highest level, I think Adam Scott is right. The best of the best should be rewarded massively more than someone in the fiftieth position.
A tour needs more swings and fewer exempt players, but with the current structure as a member organization it’s very difficult to get the majority of those members to vote against their best interests if they’re not a top 50 player, which is likely part of the reason for the slow turnaround. The things.

Milton: Modifying the number and “franchising bonus” might sound like a great idea to a superstar, but he’ll likely resent the suggestion. And with the Everyman pro accounting for the majority of the round, it seems unlikely that the number will swell to the number Scott suggested.

Hersh: I agree, Zev. There could be a couple of points in the works, but haven’t we created a chain of events that will pay out $3.8 million or more to the winners? This seems like my reward for the privilege. By creating the specific events, I believe the tour has already achieved the same goal as adjusting the payment structure. Changing it would piss every professional man off even more than he already was. And the tour needs every professional man.

Dither: Sure, I could see giving them a few extra percentage points, although 40 seems like a lot. I will put more energy behind giving the top runners in smaller events (like Sentry) more world ranking points. The new system seems to have let the winners of those events down and should adopt a steeper slope. (Just ask John Rahm.)

4. Next week’s American Express stadium is packed with 10 of the world’s top 19 players, including five of the seven, despite the fact that it’s not one of the 17 dedicated big money events on the tour. There has been some concern, at least on the outside, that leagues that are not designated for 2023 will see less-star fields with fewer stars, but that is not the case next week at La Quinta. Are you surprised, and are we going to see more of this with other non-custom leagues?

Parath: If you look at the big picture, I’m not surprised. My thinking is regardless of my bag, these uncapped events still reward the same amount of FedEx Cup points, which for top players (who play well) actually provides an easier opportunity to rack up points than “big events” with more higher-ranked players. I also think because it’s such an early year event, a lot of those big players who didn’t play as much in the fall want to get off to a good start. The real question is what happens to the little juveniles that come in the dog days of summer.

Milton: I’m a little surprised AmEx has such a strong field, but a lot of the big stars haven’t been playing meaningful golf in several months. They crave competition. I expect we’ll see some non-senior high-season events that have unexpectedly strong fields, but over the summer, the big stars will probably stick to the status quo.

Hersh: AmEx seems to have a stronger field than it has in years past, but I think that has more to do with where it is in the table than anything else. After Sentry, there is no other event scheduled until the Phoenix Open in the second week of February. January is also the only month through July with only one specific event. Once Phoenix hits, there are four events set in five weeks. Most of the big names playing Palm Springs probably took Torrey and Pebble before this stretch. The other part is that all of the top players have a quota to meet in non-dedicated FedEx Cup events. Someone like Ram, who played the CJ Cup last October, needs to add just one regular event to his schedule for the rest of the year.

Dither: The good points from everyone here – the schedule and location are in AmEx’s favor – and I think some of the sponsors have found ways to make it worthwhile for the guys in attendance as well.

5. The LPGA kicks off the 2023 season this week at the Hilton Grand Vacations Tournament of Champions. What is the one story you are most looking forward to uncovering in the next 12 months?

Parath: First of all, as one of GOLF’s “gear nuts,” the important thing to watch will be some of the big players changing equipment manufacturers, as well as whether any of those players start slower in 2023, or just keep going. in rolling.
Secondly, I hope to continue to see a resurgence of Lydia Ko after her big comeback in 2022. The only thing she hasn’t accomplished is winning a major, and all signs point to her doing it in 2023.

Milton: I’m ready to see if Nelly Korda can get back to her world-beating form in 2021. She struggled a bit last year with injury and inconsistency, but capped off the year with a win. If I can stay healthy all season, I expect 2023 to be another great year.

Hersh: Would you believe me if I told you that Lexi Thompson last won the LPGA Tour in 2019? The 27-year-old is very young and has been suffering from a three-year drought. She’s already won the LET event at the Aramco event in New York, so I’ll be interested to see if she can bring that momentum back to the LPGA Tour, or even a major.

Dither: How will Lydia Ko perform as world number one? This is the third chapter (at least) in her career, and it’s been great to watch her climb the mountain again. I’m curious what you’ll do at the top.