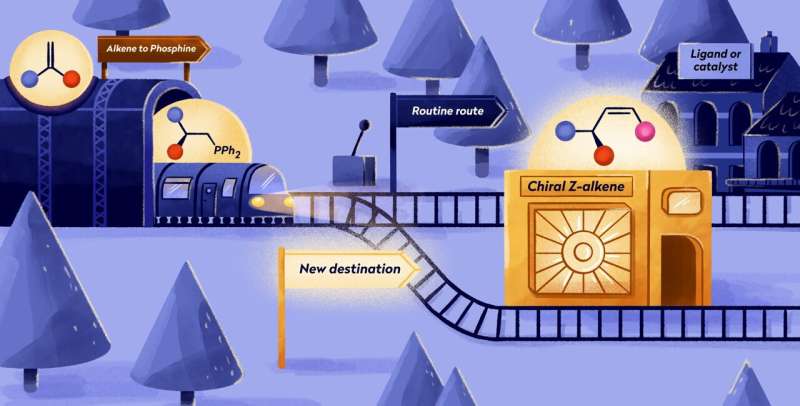 Chemists from the University of Groningen have found a simple way to produce previously inaccessible Z-alkenes, molecules that offer an important synthetic shortcut to the production of bioactive molecules.

Instead of eight to ten synthetic steps to produce these molecules, the new reaction can be carried out in three steps, without the need for any purification. The key lies in the molecule phosphine, which is commonly used to make metal-containing catalysts but turns out to be the ideal starting point for this chemical reaction. The results are published in Science advances On January 13th.

Organic compounds are versatile. Carbon atoms can be linked by single, double or triple bonds. Moreover, many biologically important molecules contain chiral centers, which are parts of the molecule that can be in two mirror image positions, comparable to the left and right hand. Molecules that have a double bond, a chiral center, and a reaction group for structural modifications all next to each other are also important, but chemists find them very difficult to make.

explains Syuzanna Harutyunyan, professor of homogeneous catalysis at the University of Groningen. “Z-alkenes are very useful, but also very difficult to make.”

The team needed to make the less stable Z alkenes, where the double bond is attached to the chiral carbon center, and more contact to the highly reactive carbon center, which is very difficult.

Using known synthetic methods, it would take about eight to ten separate steps to create such a structure. Harutyunyan and her team tried to simplify this by starting with a molecule called phosphine. Co-author Roxana Postolach says, “This molecule is commonly used to produce metal-containing catalysts. In previous work, we developed a method for making chiral phosphine, which formed the basis for our new synthetic route to Z-alkenes.”

Harutyunyan says, “We took our phosphine and converted it into a salt. This would allow the creation of a double bond with the Z configuration.”

But this salt is very reactive and all attempts to introduce a double bond have led to a lot of products that scientists didn’t want. “So, we had to find a way to set reactivity,” Postolache explains.

This step required the chalk-and-board approach, which Harutyunyan and her team used to discuss options. A possible solution was found in adding a special group to phosphine to make a different kind of salt. Harutyunyan says, “We figured this should pull electrons away from phosphorus and allow us to fine-tune the reactivity.”

First author Luo Ge took the idea from the blackboard to the laboratory. “We tried to make this idea work and got it right on our first try. It was a pleasant surprise to see our idea really work.” They then optimized the reaction and then used their method to modify the real bioactive compounds.

The big advantage of the new synthetic path is that it takes fewer steps and is essentially a one-pot reaction. It only takes room temperature for the first step, slight heating (50-70°C) to make the salt, and -78°C for the final step to make the Z-formation double bond.

Joint first author Esther Sinnema says, “By using our phosphine as a synthetic tool, rather than a catalyst, we opened up all kinds of possibilities. We could make a large number of new heterocyclic Z-alkenes and use the method to modify bioactive compounds.” In the paper, we present 35 different molecules synthesized using our method.”

“We expect our study will pave the way for using commercially available simple alkenes to make much more complex functional alkenes via phosphine and salt intermediates,” says Harutyunyan.

Provided by the University of Groningen