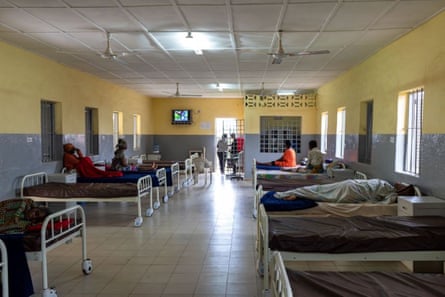 hAbubakar Jallow told a group of patients gathered in a room at the Sierra Leone Teaching Psychiatric Hospital in the capital, Freetown, that his family had accused him of being a demon. When the black magic of a local witch doctor didn’t help, he was beaten by his brother and thrown out of the house, he says.

Gallo, 27, has been diagnosed with bipolar disorder, but he’s not happy being here. They sent me here, but I hate staying here. I am not crazy.”

Group counseling is now part of the treatment here at the oldest psychiatric institution in sub-Saharan Africa, which in the past few years has undergone a dramatic transformation away from the days when patients were kept in chains.

The facilities are basic — Gallo is locked in a large room with bars on the windows with about 20 other men — but things have changed, says Dr. Abdel Gallo, the former director of the hospital. Until 2018, the hospital was like a prison. The conditions were appalling. There was no running water, no electricity, no medicine, and patients were chained to walls and beds.”

Neighbors lived with screams coming from the imposing brick building, on a hill in East Freetown. Casey’s Lunacy Asylum, as it was known, existed simply to prevent patients from harming themselves or others.

But in a country that has historically paid little attention to mental health, the government has been raising awareness and trying to counter stigma as part of President Julius Maada Bio’s “human capital” development agenda, which includes education reforms.

The hospital is operating at full capacity, and 150 patients are receiving free treatment.

After the patient chains were removed, the facility was also connected to the water and electricity supplies. There is now comprehensive care that combines treatment and counseling with the latest medicine. Yoga classes are offered and there is a basketball court.

Anneiruh Braimah, the head psychiatric nurse, began working at the hospital in 1998, and says patients’ behavior has improved dramatically since the reforms.

When people were chained, they were very angry. They were dumping whole buckets of urine and feces on us. What we noticed when we removed the chains is that the attacks did not increase in any way. In fact, they’ve gone down.”

One of the biggest issues is drug abuse. Many of the teens in the hospital use tramadol – an opioid found in cough medicine. Others reach a state of psychosis after smelling the black residue on their exhaust pipes.

Ahmed Lehi, 21, was taken to the hospital in October by his relatives.

My mother called all the local young men to chain me up in our house; she thought I was smoking [drugs],” he says. “But I broke down the door, when they said I was crazy. After that, they brought me here, where I was given an injection to calm me down.

Hague is helped with his addiction. He doesn’t know how long he will stay at the hospital, which was first built by British colonialists in 1820. “The nurses are doing their best for us,” he says. “The only thing is food – it can be a more balanced diet than just beans and rice.”

The improvements are funded largely by a US charity, Partners in Health (PIH), which helps the government with operating costs.

The charity provided $2.5m (£2m) towards the renovation. There is now a full-time psychiatrist and residency programme, set up to train seven psychiatrists who will more than double the five who currently support Sierra Leone’s 8.1 million people.

The government is preparing to roll out essential mental healthcare across Sierra Leone’s 16 district hospitals in the coming months, which will reduce pressure on the teaching hospital.

“Reforming mental health in Sierra Leone is a big undertaking, but we are up to the task,” says Labor. “Our goal is to train 10,000 mental health care professionals in 10 years.”

One of the main challenges is reforming the Lunacy Act of 1902 – a colonial-era law that contains no mention of patients’ rights. Dr. Labore says a “patient-centered bill” has been drafted, which includes protections for patient care. It should be passed in 2023 – to restore dignity to people with mental health problems.