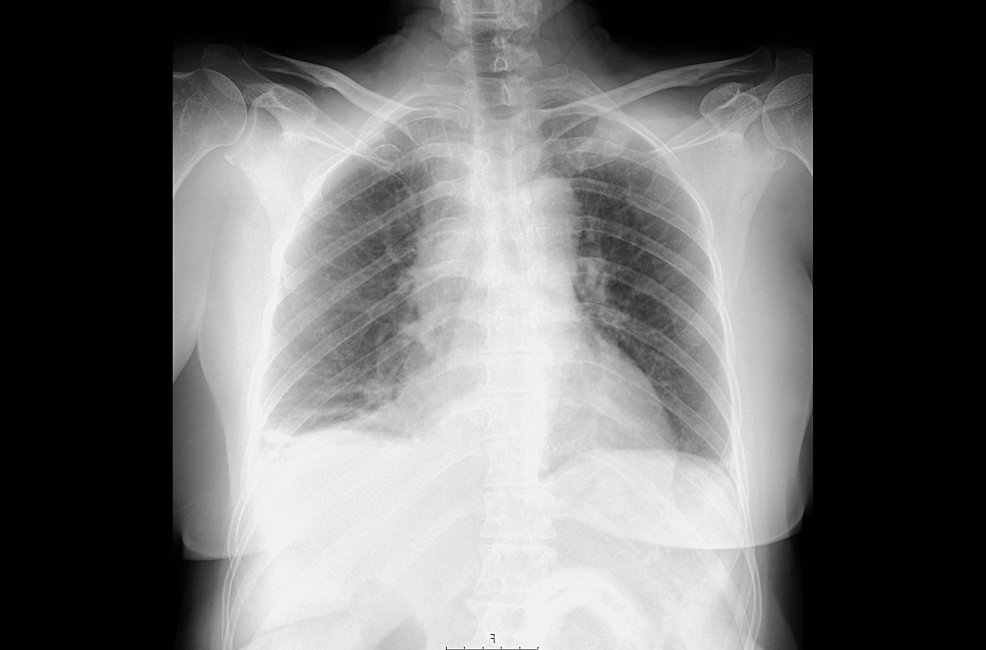 Here, we present the case of a 58-year-old woman who presented with pleural chest pain, dyspnea, and fever on presentation to the emergency department (ED), causing multiple admissions to the emergency department in 20 days. The patient was then admitted to the Department of Internal Medicine with a diagnosis of community-acquired pneumonia with parapulmonary effusion. During hospitalization, a positron emission tomography (PET) scan, computerized tomography (CT) of the chest, and pleural biopsy were performed and the final diagnosis of malignant mesothelioma was made. Six weeks after the onset of symptoms, the patient had an exponential progression of the disease, dying two months after diagnosis, despite the start of chemotherapy.

MPM remains a diagnostic and therapeutic challenge with a very poor prognosis. However, studies show that mesothelioma patients who undergo treatment live at least twice as long as patients who do not receive treatment. This case report is particularly important because although it is an epithelioid mesothelioma, multiple solid masses were observed on the CT scan and the patient showed rapid disease progression, dying a few weeks after starting treatment.

Mesothelioma is a rare tumor with an estimated incidence of around 20 per million population in Europe and is increasing worldwide. [1]. It is known to be insidious due to its long latency period which can be up to 40 years [2]. Less frequently, it arises from the epithelial tissue surfaces of the pleura, but can also occur in the peritoneum and tunica vaginalis [3]. Malignant mesothelioma (MPM) remains a serious problem as the incidence continues to increase worldwide [4] It is likely to peak until 2030 [5]. MPM occurs predominantly in men (with a male-to-female ratio of 5:1), and the risk increases with age [6]with the vast majority occurring in patients 60 years of age or older [7]. Asbestos exposure is the most common etiology associated with mesothelioma, however, there are some case reports where no exposure was found, and some other factors have emerged as important causes of MPM [8-10].

Clinical manifestations of MPM patients vary greatly, with chest pain, dyspnea, and pleural effusion being typical symptoms, often accompanied by weight loss, weakness, and other symptoms. The onset of symptoms is known to be deceptive and non-specific, resulting in a high rate of misdiagnosis [11]. Pleural biopsy is the gold standard for the definitive diagnosis of MPM, however, some authors have stated that it is difficult to make a definitive diagnosis by pleural biopsy alone and that diagnostic accuracy could be improved by adding immunohistochemical examination [12].

MPM is characterized by high malignancy and aggressiveness, and if patients are left untreated, the median survival time is only four to 12 months. [13]. There are many treatment options, but systemic treatment with resection of the visible tumor along with radiotherapy, chemotherapy and immunotherapy has been one of the most promising strategies to date. [14,15]. Non-randomized studies in carefully selected patients reported median survival times of up to 29 months and a systematic review concluded that triple therapy may be beneficial for some patients [16]. However, many new therapies are under investigation, and the future of MPM appears to include many more options than are available now, which evolve into highly individualized and personalized treatment.

We present the case of a 58-year-old woman with a history of thyroid cancer, who was treated with surgery followed by chemo-radiation in February 2021. In May 2021, the patient was admitted to the emergency department (ER) with pleurisy. Chest pain, shortness of breath, and fever.

Chest radiograph (Fig 1) showed a very small, free pleural effusion on the right side. The patient was discharged home with a prescription for antibiotics with suspected right-hand community acquired pneumonia. Over the next 10 days, the patient was admitted to the emergency room three more times for worsening symptoms and received three courses of different antibiotic treatments. However, the patient’s shortness of breath and straightening of breath continued to gradually deteriorate.

One month after the first episode, on another admission to the emergency room, chest radiography (Fig 2) showed a medium-sized right-sided pleural effusion, and a thoracentesis was performed, which showed a yellow effusion with exudate characteristics. Then the patient was admitted to the Department of Internal Medicine with a diagnosis of right-sided pneumonia with pleural effusion, and he was prescribed piperacillin-tazobactam. During hospitalization, due to the medical history of the tumors, the case was discussed with the Department of Gynecology, and it was decided to perform a positron emission tomography (PET) scan. 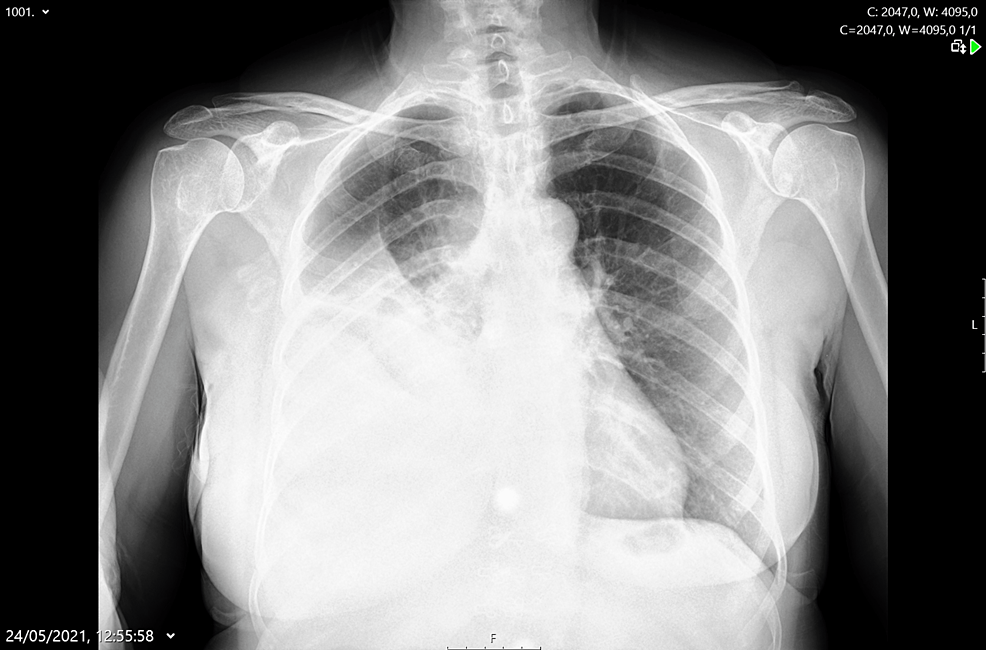 PET scan (Fig 3) showed extensive malignant involvement of the pleura with pleural effusion, with no evidence of other lesions elsewhere, the diagnosis of endometrial carcinoma malignancy became less likely and the hypothesis of a primary pulmonary lesion came to the fore. 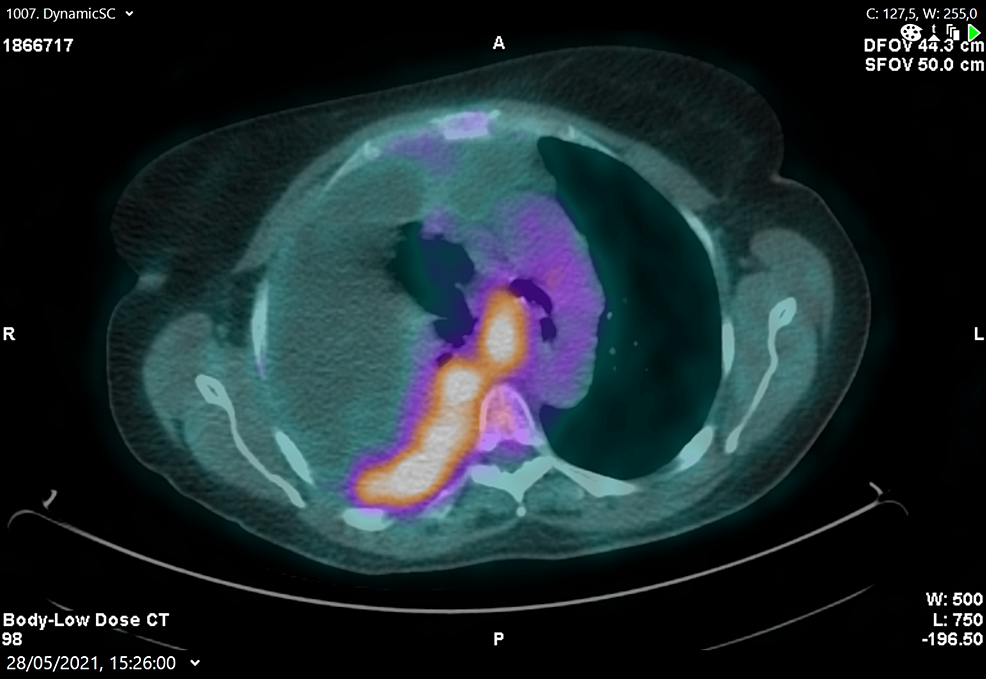 Then the case was also discussed with the Department of Pulmonology, and a pleural biopsy and therapeutic thoracentesis were performed (Fig. 4). Two weeks after hospitalization, the patient developed clinical deterioration. 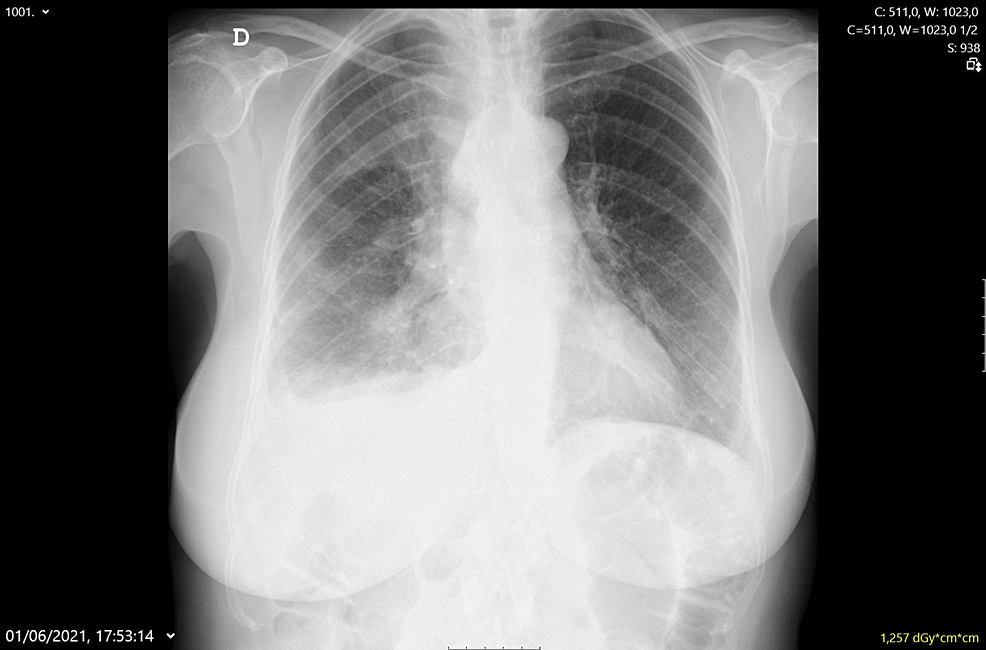 Repeat thoracic tomography (Fig 5) and showed rapid progression with multiple solid masses in the pleura and right pleural space with localized small pleural effusions, supporting the mesothelioma hypothesis. The result of the pleural biopsy confirmed the diagnosis of mesothelioma. Regarding the diagnosis, it is important to note that the patient denied any known exposure to asbestos, including occupational exposure. 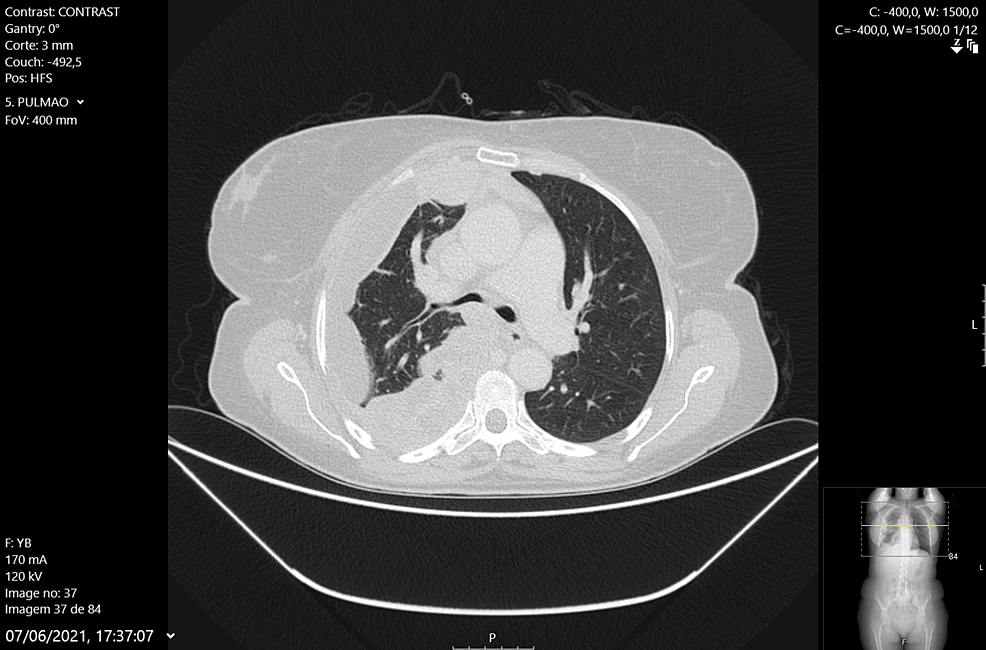 Then the patient was referred to the Department of Pulmonology and Oncology, where she underwent two cycles of chemotherapy. However, it showed an exponential progression of the disease (Fig 6) and died two months after the diagnosis. 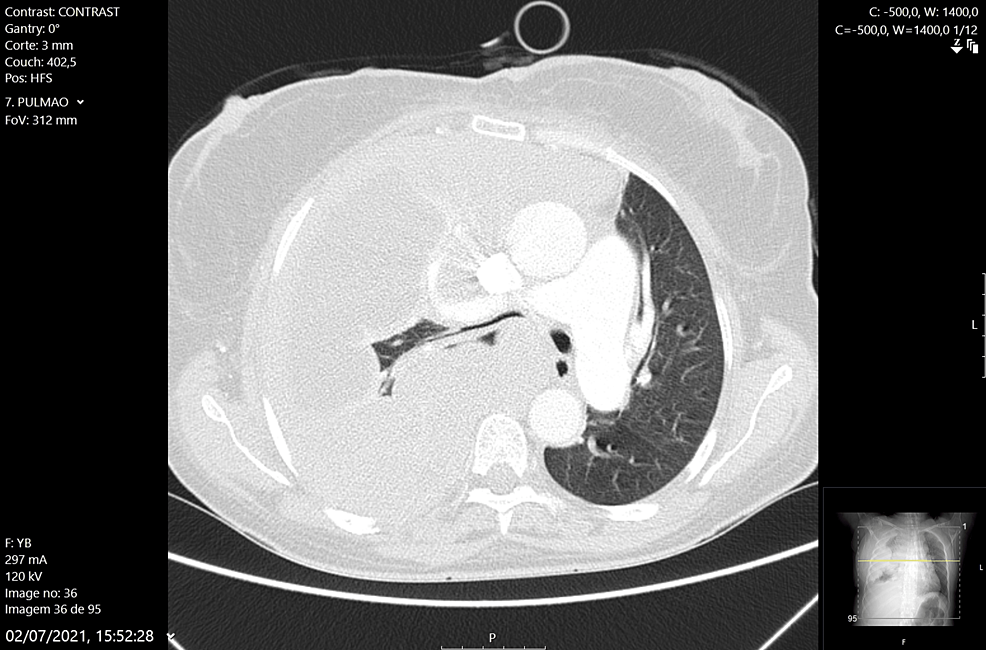 MPM is a complex disease causing significant morbidity and mortality, and its actual global burden remains unclear. However, the disease has been widely recognized in populations exposed to asbestos since the 1960s, and the WHO mortality database estimates 38,400 mesothelioma deaths per year worldwide. [17]. The prognosis for MPM is very poor and some population studies have identified independent risk factors for poor outcome as non-epithelial histology, increasing age, and male sex [18].

Maintaining a high degree of suspicion is fundamental to achieving an earlier diagnosis, and possibly a more successful treatment outcome. However, to date, there are no standardized treatment strategies and it is only expected that all available therapies will extend survival and improve quality of life. [19]. Three treatment approaches have evolved over the past decades: chemotherapy, radiotherapy, and surgery. As any one treatment modality fails to significantly affect long-term survival, multimodal treatment including chemotherapy and radiotherapy has been proposed, although the exact sequence of treatment has not been found yet as relevant clinical trials have not been conducted. Treatment options are still limited, but the future seems to include newer treatments and personalized and individualized approaches. New agents are being studied, targeted therapies for epidermal growth factor receptor antagonists and platelet-derived growth factor receptor inhibitors, immunotherapy such as tremelimumab and pembrolizumab, and therapies targeting mesothelin are examples of some of the many areas of research in mesothelioma treatment development. [16].

Here we present a case of MPM in which no etiological association was found, including asbestos exposure. Another point of particular interest in this case is the unusually severe course of the disease despite the absence of identified major risk factors. Regardless of the histological diagnosis of epithelioid mesothelioma, multiple solid masses were found, and the patient had rapid disease progression and died within a few weeks after initiation of chemotherapy. This range of presentation and progression underscores the difficulty in achieving early diagnosis of this tumor type.

MPM remains a diagnostic and therapeutic problem because of the long latency, need for histological confirmation, limited therapeutic options, and poor prognosis. In developed countries, exposure to asbestos residues is an ongoing hazard that is likely to lead to a future mesothelioma epidemic. However, treatment is the best way to improve the prognosis of mesothelioma, which may mean improved quality of life and increased life expectancy. Some studies show that mesothelioma patients who undergo treatment live at least twice as long as those who do not receive treatment. As with any rare disease, referral to experienced centers is recommended. This clinical case illustrates the very common diagnostic difficulties of mesothelioma and should alert the medical community to be aware of the projected increase in its incidence by 2030.