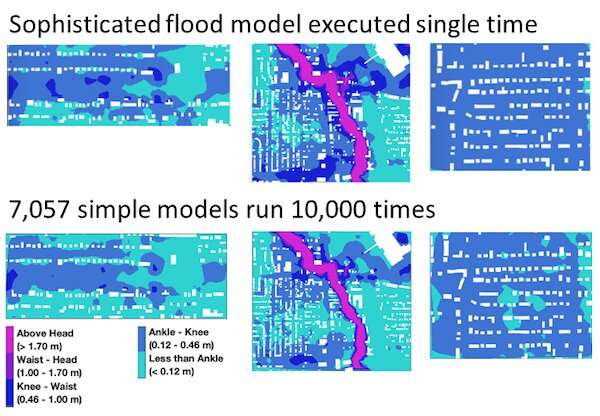 The severe floods and mudslides that have swept California in recent weeks have caught many drivers by surprise. Sewers swallowed cars, highways became fast-moving rivers of water, and entire neighborhoods were evacuated. At least 20 people were killed in the storms, many after cars were trapped in the rushing waters.

When I checked the forecast on weather apps on my cell phone during the stormy weeks of early January 2023, I wondered if people in the midst of heavy rain were using a similar technique as they decided to leave their homes and figure out the safest routes. Did they feel it was enough?

I’m a hydrologist who sometimes works in remote areas, so interpreting weather data and forecasting uncertainty is always part of my plans. As someone who nearly drowned while crossing a flooded river where I should not be, I am also acutely aware of the extreme human frailty of not knowing exactly where and when a flood will strike.

About two-thirds of flood-related deaths in the United States are classified as “driving” and “in the water.” If people had known about the potential for flooding in those locations in real time – via a mobile app or website – it is possible that some of these deaths could have been avoided.

However, even emergency management personnel are currently operating with surprisingly little information about when and where floods are likely to strike. They know where floods may occur, particularly along rivers. But every flood is different, and key questions, such as which roads can be used safely and which populations are exposed to, still require close monitoring.

I have been working with my colleagues to develop a method that overcomes current barriers to this type of forecasting. Using “probabilistic learning” — a type of machine learning — the method can create local models of flood risk that can map conditions street by street using real-time storm forecasts.

Computer programs that can predict what happens to rainwater after it hits the ground are the perfect tools for predicting in real time where and when floods will hit.

However, these flood models require huge amounts of computing power. There is currently no way to predict flooding quickly in real time anywhere. The level of detail relevant to human decisions – be it buildings, evacuation routes or infrastructure assets – is elusive.

A second challenge is the large uncertainty in rainfall forecasts and many other inputs to flood models.

Research over the past decades has explored the possibilities of solving these daunting challenges using “brute force” methods: faster computers and more computers. Ultimately, this points to the need to rethink how we predict floods.

The approach we developed addresses these challenges by using a sophisticated flood model to develop and train simpler models that can then simulate flood behavior in local environments at nearly the same level of accuracy as their more robust mentor. Importantly, we have shown in studies that even a PC can then use these simpler models to predict floods in real time. Maybe even a mobile phone.

To forecast floods, one needs to predict how the flood will start and progress in urban communities – with a high level of detail and an understanding of the limits of forecast uncertainty.

Our approach builds on basic information that many cities already possess: detailed data on the topography of their communities and their surrounding watersheds, how the land is used, the layout of buildings and roads, and the characteristics of storm drains and pipes, such as how much water they can carry. Old stormwater paving and infrastructure in particular can affect how water flows and the areas that are flooded in the urban environment.

We then use one of the most recent flood models available to train the most simple models.

These simpler models are faster and require much less computing power because they use very simple functions, each of which focuses on a single variable at a specific place and time, for example, immersion level or water flow velocity. Thousands of them can provide a remarkably accurate picture of potential flooding when real-time weather forecast information is added.

The crucial point is that these simpler models are developed at the ‘rest time’ – well before storms. These analyzes can be performed using a freely available toolkit developed by the Department of Energy.

This approach replaces the near-impossible burden of real-time computation with the easier task of using simple pre-trained models from the local community.

We demonstrated the approach in a study using the 2017 flooding in Houston from Hurricane Harvey. The results show that a computational problem that would take years to run on a typical computer can be done in a few seconds with a similar level of accuracy.

As global warming increases rainfall intensity and population grows, flood risks will rise. Another problem that is being increasingly recognized is that standards for how communities manage stormwater are based on past climate. Existing storm drains and pipes simply cannot handle the extra water, which increases flood damage costs.

While more work is needed to put this into widespread use, we believe the method opens up avenues for making flood forecasting more relevant, detailed, and accurate. It also provides means to assess the adequacy of existing stormwater infrastructure and can be redesigned to assess the impact of other natural hazards that are difficult to quantify, such as landslides and fires.

Cities with higher home values ​​are likely to see more flood forecasting services from the private sector. However, government agencies can use this type of new modeling to extend the task of forecasting to help everyone. One can envision counties, with the right skills and resources, providing local flood forecasting. Who, if not the communities, is most entrusted with the effective management of flood response and mitigation?

Introduction to the conversation

This article is republished from The Conversation under a Creative Commons license. Read the original article.