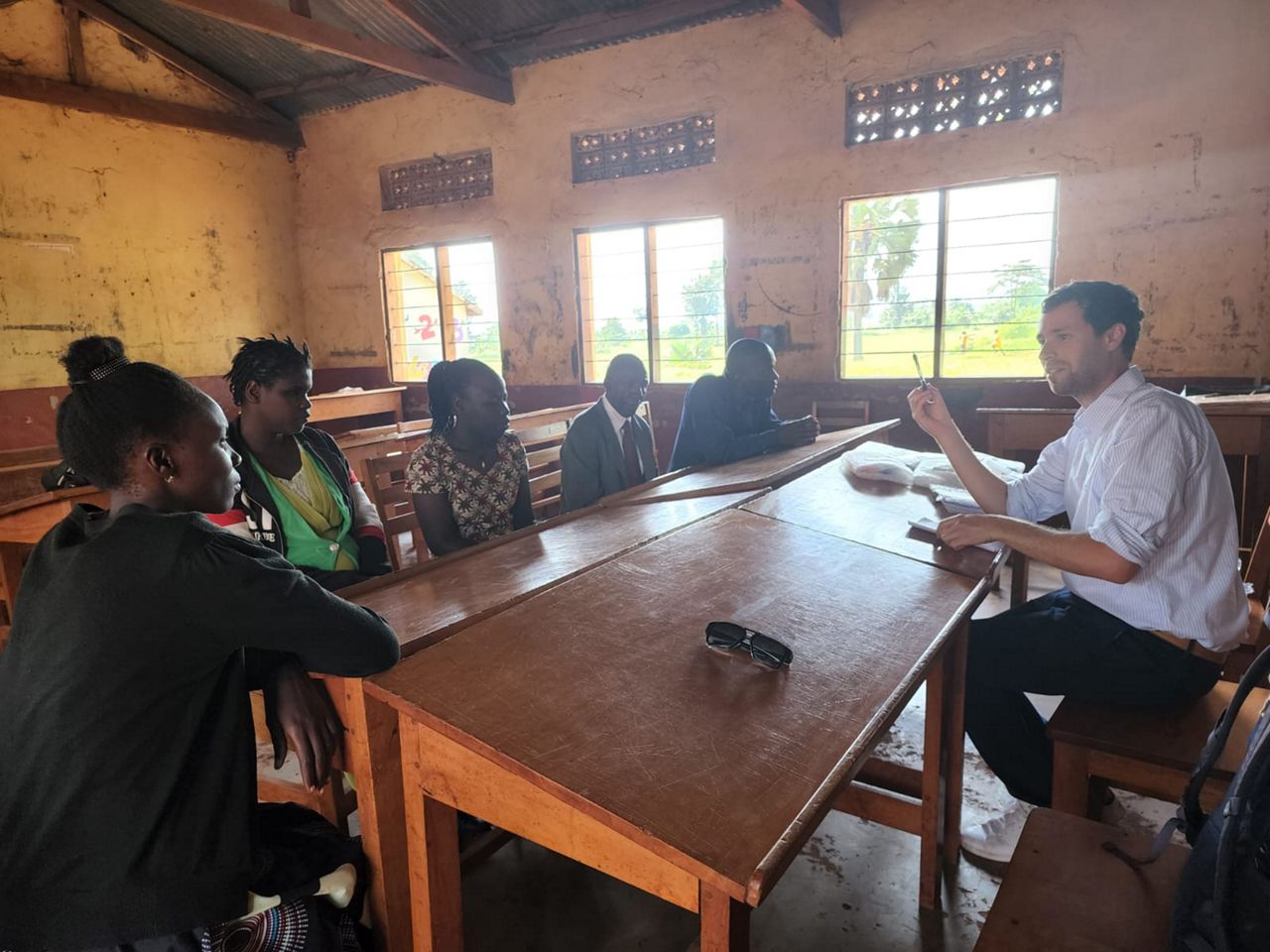 Foulkes was acting there Clovernock Center for the Blind and Visually Impaired in Cincinnati.

What you need to know

In addition to its other resources, it runs the 120-year-old organization Clovernock Braille Printing Housewhich produces books, magazines, and other materials for national library services and Braille readers worldwide.

It is the world’s largest producer of braille by volume, with more than 30 million pages printed each year.

Foulkes, Clearnook’s director of affordable production and innovation, didn’t make the trip across the Atlantic in September without thinking. He brought with him more than 2,000 culture-related Braille storybooks.

Samuel Foulkes met with educators and community leaders to discuss the needs of visually impaired students in four countries in East Africa. (Photo courtesy of Clovernock Center for the Blind and Visually Impaired)

While still in its infancy, the program focuses on early learning and literacy among a global population that has a higher prevalence of visual impairments in children and lacks access to accessible resources.

Foulkes said the current focus is on children between the ages of 5 and 10 in East African countries.

“When you think about all the early reading books print readers have access to—fun little stories about a boy and his dog, these don’t really exist for (in East Africa) Braille readers,” he said. “They’re very easy to produce because they’re usually very short books, so we thought it would be a great place for us to start some intentional engagement with schools to see if they could have an impact on learning.”

As part of the trip, Foulkes worked closely with Dominic Kiamba, from Nairobi, Kenya. Foulkes described him as “the boot on the ground” in their mission.

“Braille literacy in Africa is still in its infancy,” said Kiamba, a Clovernock consultant. “Many children struggle with reading or writing in Braille, and there are very few Braille books available.”

For Kiamba, the issue is personal. His mother is visually impaired.

He became aware of Cloverook through inquiries about organizations supporting braille literacy and production, and wanted an opportunity to work with the organization.

Kyamba recalls interacting with a 9-year-old girl, Fiona Hamisi, from Tanzania who really stuck with him.

“The Cloverook crew that came to visit us was a wonderful and game-changing initiative that gave everyone the optimism that a little blind girl in the most isolated African village would have access to a Braille storybook to read at home and at school,” he added.

As part of his role, Kiamba has located schools with the most needy children with a visual impairment – Nairobi; Kampala, Uganda; Jinja, Uganda; Soroti. Uganda; Ramagana, Rwanda and Dar es Salaam, Tanzania.

In addition to a lack of some educational resources, Foulkes said, many schools also lack the funding to secure those resources. He added that Cloverrock would raise funds to support the growth of the programme.

Each school received 200 to 300 books made up of 12 different stories in three different languages ​​- English, Kiswahili and Kinyarwanda.

One such story is “Chicken and Millipede,” which tells a comical story about two animal friends who get into a terrible fight while playing soccer.

Foulkes fondly remembers hearing the children laugh while reading that story while visiting a Ugandan school for the blind.

Along with the book, each school received 12 sets of custom-designed and printed 3D models representing items in the book, such as an elephant, rabbit, or soccer ball.

Foulkes said the models provide an element of “tactile learning” that allows the reader to fully understand what is happening in a scene.

Some books also contain modules that relate to the learning objectives. 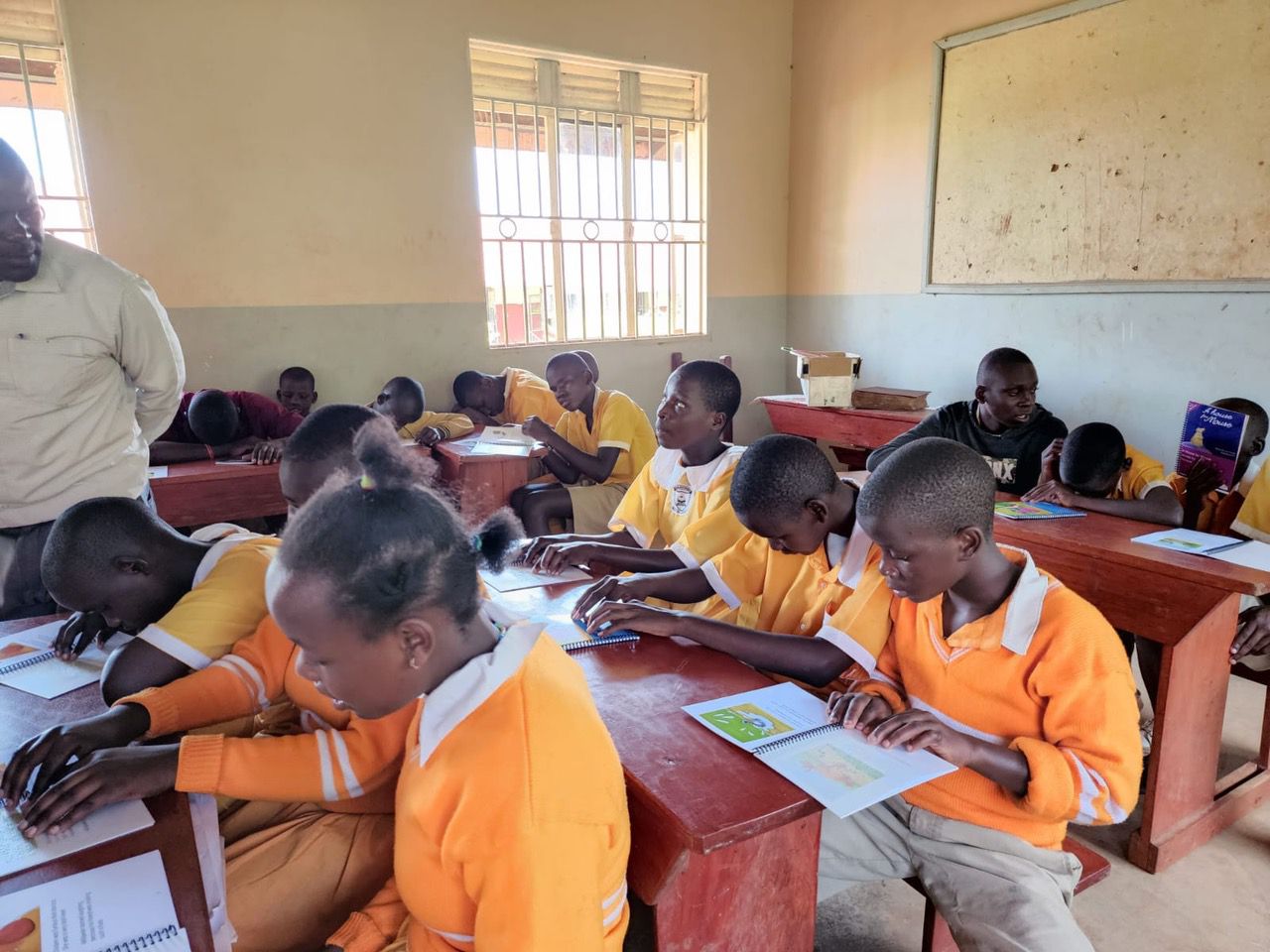 The schools received 200 to 300 books and 3D models to help explain the stories in the book. (Photo courtesy of Clovernock Center for the Blind and Visually Impaired)

In How Far, for example, the story is about a javelin throwing contest. Readers can “play along” with the model, as different animals spear at different distances: close, far, further, farther.

University of Cincinnati graduate student Henry Levesque designed and produced many of these 3D model kits during a summer internship at Cloverook.

“There is something really magical about seeing young students having these moments of joy when it comes to learning and reading,” Foulkes said. “It felt like a moment of validation for the work Clernook is doing, and one I won’t soon forget.”

This kind of learning is also important for children with visual impairments, Lusk said, when it’s a children’s storybook or braille signage outside a public restroom.

Lusk noted that unlike children with a visual impairment, children with typical vision are “bombarded” with textual and visual cues that help them make sense of the world around them when they are young.

“We want to make sure that (children with visual impairments) are given a literacy-enriched environment as early as possible because they will miss out on anything they won’t be able to encounter in the way that other children do,” he said.

Cloverook produced the books in Braille print form. Some pages have large printed text, while Braille pages are embossed onto clear plastic pages.

This method results in a storybook accessible to anyone, regardless of visual acuity. Kiamba said the format made it easier for teachers, students and parents to read with them.

“The children couldn’t stand it because they enjoyed reading it,” he added, indicating that it was an immediate change of confidence in the children.

As part of his trip, Foulkes interviewed teachers and community leaders to better understand the needs and challenges of each school. The Cloverook team plans to use this information to enhance the program over the next several years.

Clernook plans to use these findings to identify ways to improve and enhance the program.

Foulkes believes the initial plan is to return to those cities and schools again in the future and continue working with many of the same children.

He said that based on what they learned, they would expand and exit in the future.

“There are so many children who could use our help, and we look forward to helping them in any way we can,” Foulkes added.