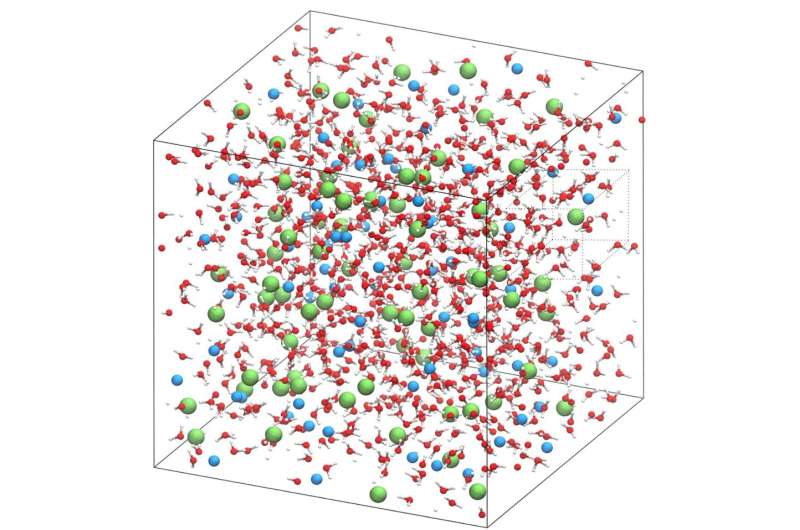 In salt water solutions, water molecules move rapidly around salt ions on a scale of more than a trillion times per second, according to experiments and simulations led by scientists at NYU and the Sorbonne.

“There are more solutions to salt than meets the eye,” said Alexej Jerschow, a professor in the Department of Chemistry at New York University and one of the study’s senior authors. “This was evident when we measured and modeled the very fast dynamics of the surrounding NaCl ions and water molecules.”

Results published in Nature Communicationswill allow researchers to build more reliable models for predicting the dynamics of ions, which can be used in a variety of scientific endeavors, from improving rechargeable batteries to magnetic resonance imaging.

Ions are ubiquitous and essential to life. Many ions, such as sodium and potassium, are prevalent in the human body and dictate cell survival, nerve signaling, and the structural integrity of tissues. How the ions interact with the solvent also plays an important role; For example, rechargeable batteries rely on the movement of ions through electrolyte solutions.

Ions in an aqueous solution are usually surrounded by four to six water molecules, but it is not well understood how far these molecules move as a unit and how much movement the water molecules experience. Previously used models were insufficient in capturing the coordinated motion between water and ions.

To study the motion of salt and water molecules, the researchers used nuclear magnetic resonance (NMR) spectroscopy, a versatile tool routinely used to determine the structure of molecules, and combined experimental data with detailed computer simulations that can model the dynamics around them. salt ions on an atomic scale.

Testing salt water over a wide range of concentrations and temperatures, and combining experimental data with computer simulations, the researchers observed that water molecules oscillate around sodium and chloride ions at an extremely fast rate — more than a trillion times per second. In addition, it was previously assumed that the ions move with the surrounding solvent molecules as a single unit, but experiment has shown that this is not the case; Instead, water molecules vibrate much faster than ionic water complexes.

“We found excellent agreement between experiment and simulation, which allows us to build reliable models of ion dynamics,” Gershaw said.

“We are now moving on to more complex electrolytes and to what happens near solid surfaces, and the combination of experiments and simulations will again be necessary to make progress,” said Benjamin Rotenberg of the Sorbonne and the National Center for Scientific Research (CNRS) in France. The other lead author of the study.

“We expect this work to provide insights in many fields — from medicine to energy storage — that build on a good understanding of the dynamics of ions in solution,” Gershaw added.