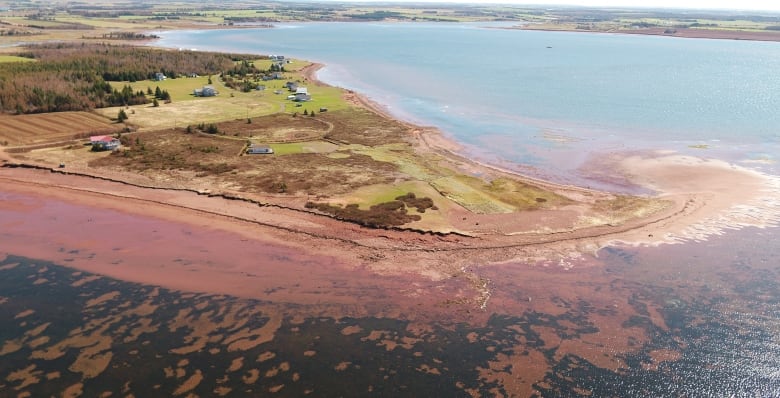 Andy MacDonald and Luke Melosh got a bird’s-eye view of the devastation caused by post-tropical storm Fiona, as they took UPEI Climate Lab drones around Prince Edward Island to survey the coast.

MacDonald has been involved with the UPEI Coastal Monitoring Project since it began in 2016, taking measurements on the ground at 100 sites, along with drone surveys.

But he said what they saw in Fiona’s aftermath was “unprecedented”.

“The biggest losses we’ve seen – which were very rare – were in areas that lost five metres,” McDonald said.

“But after this storm, we saw areas that lost more than 10 meters, and suffered an area that we had not seen before, and that we have never seen in historical records either.”

The drone crew, now at the Canadian Center for Climate Change and Adaptation in St. Peter Bay, was able to visit more than 25 sites, capturing video and still images from the sky.

Regardless of our own interest, [we had] “There’s a lot of requests from different departments across PEI, different organizations, watershed groups, different municipalities, and national parks,” McDonald said.

“But we just want to be able to take as many pictures as possible in order to better understand the damage, and in which parts of the island the most damage occurred.”

Milosz has been with the Coastal Watch Program since 2019, and Fiona was struck by the damage.

“It was a bit traumatic,” said the drone pilot. “You would go to places, and there would be empty foundations. You would drive along the coast and you would see the wreckage of somebody’s house washed away.” .

“There will be vast stretches of coastal roads where we drove before, and now there is no road.”

Melosh said the damage from Fiona will help researchers decide where to focus monitoring work in the coming years.

“I expect it will add a lot of interest, and we may end up with more sites,” said Melosh.

“Right now, we’re flying around 107 sites around the island, but more people will be interested. They’ll see that, ‘Hey, this area is hit hard.'” Can you add somewhere there? “And we hope to stick to that.”

MacDonald also said coastal monitoring will be important in the coming years as islanders – and governments – grapple with cost-effective ways to deal with climate change.

“I think as an island made of sandstone, figuring out a way to protect our coastline is important,” he said.

“Coastal shielding in Prince Edward Island is certainly a complex question. I think you see a lot of people who end up paying for a lot of coastal shields that end up not being overly effective.

“Spending tens of thousands of dollars to arm your personal shoreline may not be the kind of simple fix some people might think it would be.”

MacDonald said there would be years of research to be done on the Fiona effect.

“There’s definitely a lot of interest in looking at the data after Fiona — whether that’s aerial photos, or weather station data, or tide loggers,” he said. “We’ve had a lot of colleagues from different departments ask about the information we have.”

“I can definitely see some master’s projects, some PhD projects, and some class projects coming out of this event,” McDonald said.

“I don’t think anyone is going to forget Fiona anytime soon.”