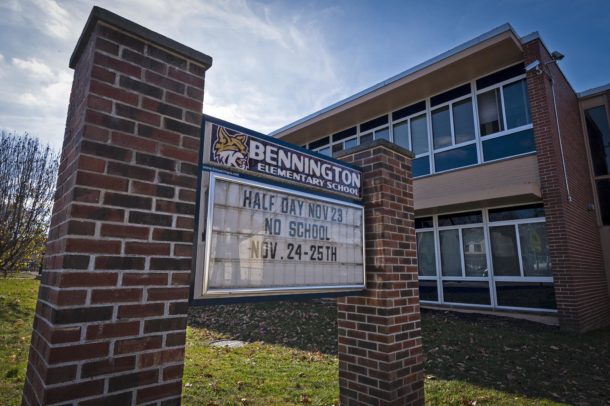 The principal of Bennington Elementary School announced that she would be resigning at the end of the school year. Elisabeth Grunberg’s decision comes amid ongoing concern about students’ mental health and behavior in the school and district.

“It has been a great privilege and invaluable learning experience to be the principal of Bennington Elementary,” Grunberg wrote in a January 3 letter to the Southwest Vermont Unified Elementary School Board. “I am grateful for the opportunity and will cherish the time I spent with the Bennington Elementary community. However, it is time to move on to the next challenge.”

Grunberg told school board members she will be leaving at the end of her contract on June 30. And in an email to VTDigger, she declined to answer questions about her decision.

“This is a personal and professional decision,” she wrote. “I love the relationships I’ve built with students, staff, and the community. I wish everyone the best of luck moving forward.”

Katie West, a spokeswoman for the Supervisory Union of Southwestern Vermont, said the supervisory union could not comment on personnel matters.

Bennington Elementary School was the subject of a VTDigger investigation last month detailing the school’s struggles to deal with students’ mental health and behaviour.

This investigation found that from September 2021 through October 2022, police were called to the school nearly twenty times due to students’ behavioral issues. Police reports obtained through a public records request shed light on a number of disturbing incidents.

In one incident in October 2022, police were called to respond to a student who had threatened him — only to end up addressing another student who was making vulgar and violent threats and was “out of control,” according to the police report.

According to the report, this student was cited for disorderly conduct in the family court.

In that incident, which was not previously reported, “Grunberg expressed frustration with the lack of support in trying to deal with the students and their behavioral issues,” the officer said.

District officials are working to expand resources for students struggling with their mental health.

Officials from the Southwestern Vermont Stewardship Federation have set up a facility in the former Beech Street school building on South Stream Road to provide temporary mental health support to struggling students. The Bennington Banner reported on the facility earlier this month.

The goal of the facility is to provide short-term clinical support, counseling and education to students who need it, Kate Abbott, director of student services for the Supervisory Union, told the board meeting.

While the “vast majority” of students do not have behavioral concerns, Abbott said, “we do have a very small percentage of children who are experiencing some major trauma, or who are working through some challenges at the moment with their mental health.”

The facility, which Abbott has named the Beach Street Center, aims to serve approximately 15 students at a time and has three dedicated staff members.

“It’s a great start,” Culkin said at the Jan. 10 meeting. “And very important. But I will keep you posted as this transfer site progresses.”

If you want to keep up with Vermont education news, sign up here to receive a weekly email with all of VTDigger’s reports on higher education, early childhood programs, and K-12 policy.