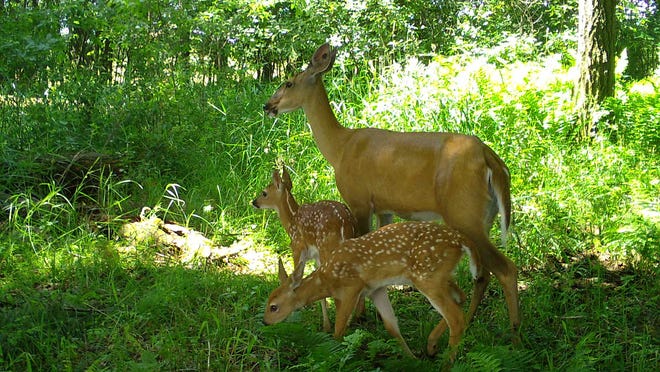 Thousands of trail cameras sit in Wisconsin’s woods, plains, and grasslands, silently waiting to snap a photo of a passing animal, a curious bobcat, or a group of galloping otters.

Millions of these images have been compiled for all to see thanks to the Snapshot Wisconsin program created by the state’s Department of Natural Resources.

Many are blurry or only show an ear or tail at the edge of the frame. But others reveal hilarious, anxious, and heart-wrenching scenes—moments rarely seen by humans.

The project has dedicated fans, and photos from the site have been shared widely on Twitter and Facebook after The New York Times recently covered the project (which Journal Sentinel outdoors columnist Paul A. Smith has covered regularly, including for a 2014 article).

Snapshot is a “citizen science project” run by the Wisconsin Department of Natural Resources. It works by having volunteers set up cameras in pairs, at least a mile apart, all over the state.

To date, tens of millions of images have been taken by more than 2,000 cameras across Wisconsin, all of which have been made by volunteers.

As popular as the software is now, it can capture images in a large number of ecosystems, revealing huge amounts of wildlife.

Snapshot Wisconsin is funded primarily by Pittman-Robertson dollars given to the Wisconsin DNR by the federal government.

The project has multiple goals, Smith reported in 2018, including getting more residents involved in wildlife monitoring, improving DNR-citizen relationships and assessing the distribution of carnivores statewide.

How to participate in Snapshot Wisconsin with your trail camera

To participate in the program, you need to have access to 10 acres of land. You must own the property or have permission from the landowner or manager of public lands to place a trail camera there.

Trail cameras must be at least 100 yards away from any buildings, paved roads or wildlife hunts. Cameras should be checked every three months.

Anyone can visit the Snapshot Wisconsin website to help categorize the animals captured in these millions of photos.

With a few clicks, you can determine whether the animal in the shot is a deer (or a weasel, otter, fox, house cat or human, among dozens of options). Some animals come with tracking tasks, such as determining if a deer is “awake,” resting, or “staring at the camera.”

The information is used to develop new ways to monitor deer populations and track population sizes for different species.

And photos of whooping cranes, moose, cougars and sable give DNR the confirmed locations of these rare species.

more:Smith: Snapshot Wisconsin has put 50 million wildlife photos into people’s hands. Give them a look.

Snapshot Wisconsin has become a useful place to discuss nature

Part of Snapshot Wisconsin is a forum where people can comment on their favorite photos, share tips on good camera positions, and create funny captions for some of the best zigzag candy.

Users will mark a particularly good photo — one that captures an intense scene, a beautiful moment, or a rare animal — as a “super photo.”

In one post where people were looking to find out the differences between coyote and wolf, a helpful respondent shared the “Wolf and Great Coyote Test” from a DNR in Oregon.

“Not only does it test your skills, but it’s also a great learning tool for canine traits. Have fun!”

more:SMITH: The weather so far has been harsh for traditional outdoor winter activities like ice fishing in the Milwaukee area, southern Wisconsin

more:SMITH: A group of biologists is filling in the knowledge about the elusive Wisconsin salamander, the mud pup